This is the story of our friend Lauren and her time in jail this New Years. I talked to her just after her release on the morning of Thursday, January 3, 2008.

Her crew of friends went to go play in the desert some 40 miles North of the California-Mexico border. After a few days camping they were traveling north, away from the border, heading back to Oakland when they were stopped by Homeland Security.

The Flower Shop Bus is not a corporate branded coach with business professionals in suits. The outside is a unique, colorful explosion of art and counterculture; a rolling bohemian transport.

“But we never crossed the border. We never left US soil, and you have no reason or right to detain us,” they protested.

Standing outside the bus with their police dog Homeland Security was not deterred.”If this dog is not let on board the bus we are going to have to pull everyone off.”

The passengers were not willing to give up their constitutionally protected rights. “We do not consent to a search,” they said. 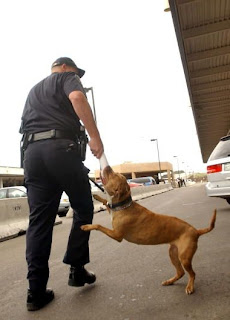 So the guards walked the dog around the outside of the bus. At some point the dog handler interpreted the dog’s actions as a sign. “We have probable cause now. Everyone off the bus”

The passengers complied with the orders. “Funny thing,” one of the passengers said. “Once they had decided they had probable cause to search the bus they did not bother to take the dog on board. They just started throwing things around.”

The passengers were not trustful of the guards. “can we watch you search our bus?” They asked.

“You can observe from outside the bus.” the guards said. Then just moments later all the passengers were told to go inside the holding cell at the Homeland Security station.

The Homeland Security guards searched everyone. They took everything other than one piece of ID and cash money. The passengers were then locked in little gray rooms. One with 6 guys. Another with 6 girls. Their accommodation included:

They were repeatedly told that they were not being held or detained. (Once a person is detained that person gains certain protections and rights, including being told why they are being detained. If the officer cannot tell you why you are being held you are free to go.)

To avoid letting their spirits dampen they played games like hurricane and farticane and tried to communicate with the other holding cell.

Eventually the guards brought everyone to a room with a table on which sat a pile of drugs: marijuana and mushrooms.

After a long moment they asked who was responsible for these drugs. Everyone was confused then, quickly, the passengers all became very irritated. They had just spent half a week in the desert. By the time they left their makeshift campsite they had almost nothing left. No paint for art, no food for eating, and certainly no drugs.

It was explained to them that although there was no way to prove ownership they would all be charged with possession, trafficking and the like. They would not detained, nor held, but they would not be able to leave. Or, if they cooperated, and the owner took responsibility everyone else would go free. After some discussion about their options it was decided that the driver would take the fall: misdemeanor possession of marijuana, and felony possession of mushrooms. Also a French girl who had overstayed her visa is in the process of being deported. Presently she is being held in San Diego.

Quipping about the drug war and the incredible waste of resources it creates, one anonymous passenger said, “I think they should go out and pluck all the plants that are illegal.”

“It is rather ironic. Here are travelers on a lonely road… Here is a federal agency that I pay to keep me safe…”

Shawn was able to get Lauren a flight so that she could reconnect with the Bike Pornification Tour. She got off the plane onto the BART and caught the last half of the 2nd show in San Francisco.

Lovers of pornography beware! Our borders shrink every day and our rights diminish even faster. Persecution for behaving or appearing different is tantamount to enforcing a homogenized, milquetoast culture of xenophobia.

Wear protection, carry lube and be ready to defend your sovereignty .