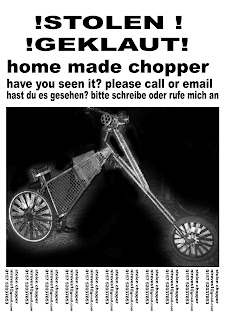 Just last night following a screening of Pippi Longstocking at the Kopi squat in Berlin the massive chopper known only as, “The Chopper” was stolen. The lock was found broken where the bike was left last night. 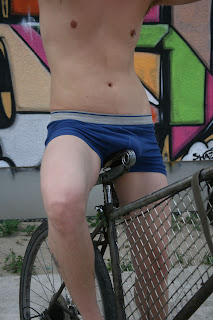 Where will this package rest now?!?

The bike and rider (or cycle and cyclist if you are feeling more PC about the “use relationship of bikes”) were planning to attend the final screening of the also massive, 6-month Bike Smut European Tour in Berlin this Thursday.

To combine the sweet satisfaction of witnessing a room full of sexy bikers appreciating your best pedal strokes with the gut wrenching notion that some thieving bastard may be riding around on your baby is horrific! 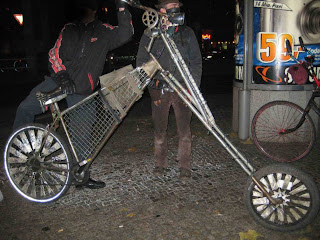 We are hoping to avoid that pain and provide that joy! You can help by taking note of interesting bicycles and telling a friend who lives in Berlin.

The Screening is to be quite the gala smutty affair, with the biggest names of the post-porn world coming together to appreciate grace, liberty, and hot fucking bikes. (ideally ones that are no hot because they were stolen)

But it is all so bittersweet.  Please keep your eyes open for this bike. If returned you will be granted discreet bike sexual favors, plus free bicycle maintenance and instruction every Friday afternoon for a year! 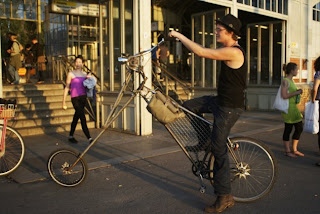