Beth and Bike Smuts Excellent Adventure: Bozeman and beyond.

revphil Posted in bike smut, bozeman, erotique style, montana, Turning Trixxx, zoobomb — No Comments ↓
After Colorado we were pretty gosh darn tired. We had to get to Bozeman, Montana, however it was quite a  treck so we decided to spend a night at Revs sister in laws parents. On the way to their house however, we had to stop by a hospital. Rev unfortunately had a bad staph infection in his right leg that was taken care of with antibiotics. While we were in Colorado it started to hurt more and more, and he was afraid the infection was going to come back. So we stopped by a hospital on our way to our hosts house for the night. The doctor said that there was nothing to really do except rest, and keep it elevated, so we took of to our hosts without much more information then we had before. 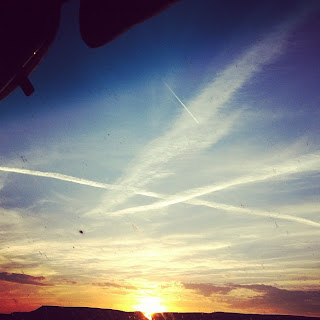 We spent the night in a lovely farm house in Wyoming. We were stuffed full of steak and potatoes for dinner and the most amazing pancakes for breakfast! The morning after our night there it was time to make the three hour drive to Bozeman. The headwinds on the I-94 were insane on the way, and more then once our car topper flew open and we had to get out and close her up again. The second time it happened revs sleeping mat flew out and since his leg is messed up, I took a five minuet walk back down the freeway to retrieve it. Have I told you guys yet that I hate big semi trucks? Well they are worse when you don’t have the protection of a car door and window between you and its giant beast of a body. Well that was a scary walk, I can tell you. 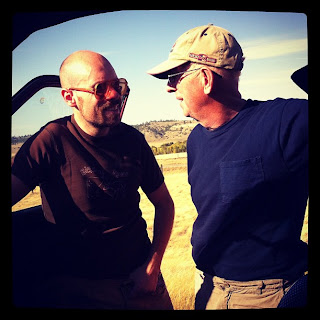 While I was walking a friendly gentleman stopped to see if we needed any help. His name was Leon and he was a well versed traveler. From Canada originally, he makes his way down through the states to Mexico city every year in his van. What a lovely, genuine man. Gave us some traveling tips about traveling in Mexico and hopes that we can meet up there at some point. When he finally left and we had everything secured down to the roof, we went to start the car… and of course she would not start. So for the second time this trip we had Babs Johnson towed, this time we were in the tow truck (first time for everything), and we were taken the last sixty miles of the trip into Bozeman.
We dropped of the van at a garage and were picked up by an old friend of Revs from Portland. A curly blond haired zoobombing awesome lady named Harty. She was a modern day cowgirl, and so much fun to hang out with. Not only was she extremely easy to get along with, but she was also a fantastic cook and each night we had something delicious for dinner. While the van was getting fixed up, we spent the day visiting the space where we were to do our show that night, passing out flyers to college kids and visiting a sex shop called The Erotique, where I got my first vibrator given to me after I mentioned that I didn’t actually own any sex toys! Its a cute little purple shiny thing called a bullet. Wooooeahhh!! Haven’t used it yet but ill tell you all about it when I do (maybe). http://www.erotiquestyle.com
Well the gentleman gave us all sorts of fun little gag gifts like a blow up sex sheep and a silly string spurting penis to give away at a show. That was really lovely of him. Our show that night was a small one, one of the smallest we have had, but the crowd was lovely and participated in their way and the ones I did get to talk to said they really enjoyed it and were glad they came (pun intended?).
The next day our van was fixed and we took of for our drive across North Dakota. Eleven hours away was Minneapolis, and with nowhere to stay in any of the Dakotas we decided to make it an all night drive. My first ever all night drive and also mu first experience with five hour energy shots. Expert Tip: Don’t mix them with redbull. I didn’t sleep at all. I drove for five hours straight while Rev slept in the back of the van, until I decided I should probably try and sleep. I don’t know if you guys have ever tried to sleep on that stuff. It doesn’t work. I lay low for three hours while Rev drove then took over for him again when he could no longer carry on. This happened on and off until finally we were in Minneapolis! And oh the fun times we had in front of us that we had no idea awaited us!
More on Minneapolis coming up in the next blog post. Probably gonna be obvious by the title. Keep an eye out.
SUUCKKKAAAA