revphil Posted in 303 vodka, bike polo, bike porn, bike smut, Boulder, Burnworks, Colorado, deer pile, Devner, Fort Collins, Lyric Cafe Cinema, phoenix asylum, Turning Trixxx — 2 Comments ↓
What an incredible few days spent in Colorado!
Well, at first Babs Johnson, the smuttiest van in the world, decided to break down on us just outside of Fort Collins. What a beezy. So we got her towed to a local shop and were picked up by Revs brother. We spent the night at his house and the next day met his lovely wife and cute son. We broke down on Tuesday and had a show on Wednesday so we gathered all that we needed from the Van, borrowed Revs brothers extra car and made our way to Boulder for Wednesday evening. Our show took place at a warehouse called the Phoenix Asylum, where a handful of local artists rent out spaces and work there. The show was great, lovely people came and they had some interesting questions. One being, “Is it cheating if you ride more then one bike?.” I personally have five different bikes so am I bike polyamorous? I’m not sure. 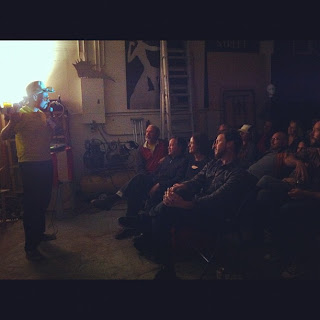 After the show we hung out at 303 Vodka with some of the local bike enthusiasts. Drinks were drunk, I had a Vootbeer float (vanilla vodka, rootbeer and whipped cream, yum!), and friends were made. An old friend of Revs, Gaylen, provided some hilarious commentary on the bike porn industry and made us laugh a whole bunch. Del, the co collaborator of a space called Burn Works that builds freak bikes and bike furniture among other things, offered to lend me a bike since mine was on the van still. This was for the ride that was happening Thursday night. The Happy Thursday Ride, with a theme of disco zombies, I just couldn’t miss it. The gang convinced me to stay in the area for an extra day while Rev sorted out the van. Rev ended up passing out in Gaylens big red box truck, Clifford, and I stayed with a wonderful gentleman named Peter, who worked from the Phoenix Asylum. 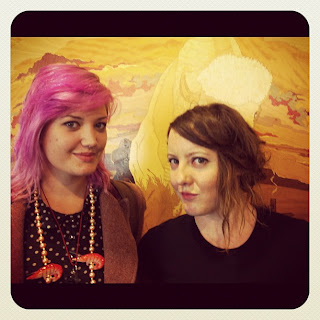 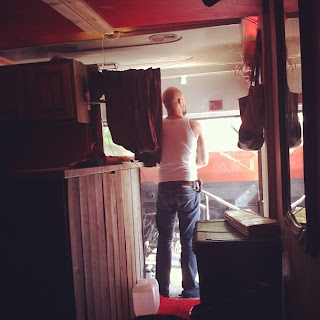 Thursday morning Rev, Gaylen and a lady that I don’t remember the name of met up for breakfast. It was lovely, and we had a waitress called Muffin who looked and sounded like Drew Barrymore. They think I look like her too so we took a picture together. It was a wonderful way to start the day. Phil went of to work on the van and I stayed in Boulder and hung out with Gaylen all day on Clifford. We ran errands, picked up some beer and around 7pm we got on our bikes and rode out to meet the ride. It was unlike any ride I have been on before. Each stop was extremely short, and there was a bicycle cop that rode with everyone and stood there staring at us as we danced to disco music and hung out. It was like being at a middle school dance with a chaperone watching your every move. Regardless of Sgt. Buzzkill, we had a lot of fun. It was nice to be back on a bike again and I made some new friends. One of them was Reverend Tommy, a wonderfully bald gentleman with a kind voice and soft personality. We got along well. 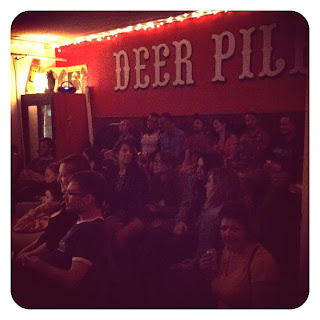 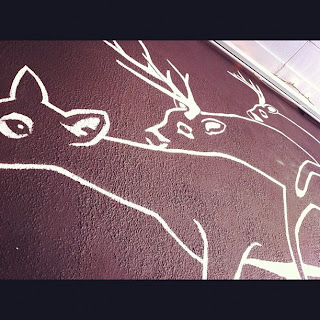 Friday rolled around too quickly and it was with a heavy heart that I left Boulder. But the next show was upon us and the excitement one can only get before a show once again reared its little head. Our next show was in Denver, not too far of a drive and we made it there in no time. The space we performed at was called the Deer Pile. It was a wonderful community of local artists that open up one of the rooms so acts like our can do shows and get out our word. The show went as well as one could expect, with one gentlewoman wearing the underpants again but this time over sparkly leopard print tights. It was a laugh, and after the show we drank beers and hung out with the local artists that worked at the Deer Pile and helped us put together the show. It was there that I met a wonderful new friend and my new pen pal. His name is Ethan, and we stayed up till five o clock in the morning chain smoking hand rolled cigarettes, drinking tea and talking about life, art, music and everything in between. It was one of those conversations that belonged in a movie and one I will remember for a lifetime. Sleep finally came on a giant bean bag chair at the Deer Pile and by 10 am we were ready to start our day! We hopped in the Van, she wouldn’t start, so a friend of Revs jumped her. We then drove her over to Denver Bike polo. We hang out at bike polo for the day eating a picnic or a whole chicken, baguette, cheese and assorted veggies. That was Saturday, the day we had our show in Fort Collins. Oh my oh my. 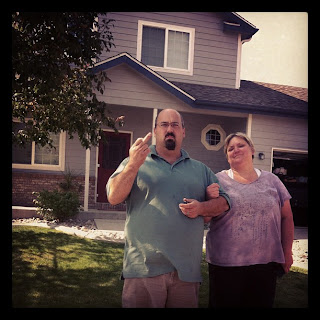 Leo and Marsha, our wonderful hosts and Revs family.
http://lyriccinemacafe.com/

We had ended up back at Revs Brothers house where naps and showers were taken before the show. We then realized that the films had to be put on a DVD since the Lyric Cafe Theater that we were doing the show at didn’t have the right system for a lap top. It took longer then expected and by the time the DVD stopped, we were late. We rushed and got there just in time (kiiinda). Rev started the show, but I am not sure how smoothly it went as I was in the cafe part setting up my merchandise table. I did go into the show half way through however and about five minuets after I did a young woman, who apparently did NOT like the show, stood up yelled “This is an outrage!” and stormed out. I am not kidding. The whole audience applauded her and one gentleman shouted after her “You are a dying breed!”. Fucking hilarious. She then proceeded to argue with the barista that worked there about her views on being a conservative. Such entertainment. The show packed up around 1am and exhausted and feeling like zombies we made our way back to Revs brothers for some well needed rest. 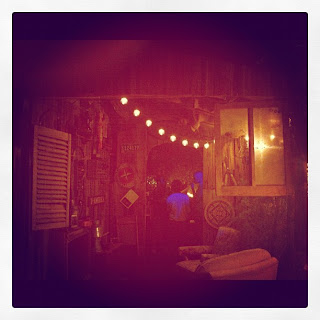 On Sunday, we stopped by Boulder again to say goodbye. We swung by the Phoenix Asylum, Burn Works and 303 Vodka warehouses and ran into Gaylen. He told us of a BBQ that night and we were down, of course. We went to a supermarket with a wonderful couple and Gaylen sitting in the back of Babs. We picked up chips, dip and STEAK. So much steak. Oh and beer. Lots of beer too. We spent the night grilling, eating RANCH (say it in a British accent I dare you) and talking about powdered donuts. It was a lovely night, however it couldn’t last forever and we had to eventually clean up and go out separate ways. The next day we had a lovely lunch with Revs brother and his wife (two of the nicest people I have ever met!), and then we were on the road again. This time heading for Bozeman, Montana! 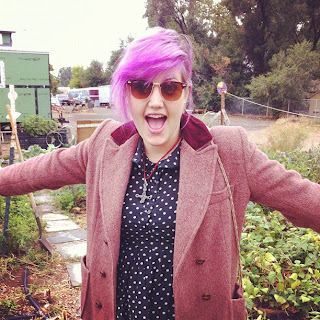 Sometimes you just gotta visit and hang out in community gardens.
http://www.hammertimeprojects.org/
What crazy adventures have we gotten ourselves into since then? Well you will find out shortly as I will be posing them right here for your very own eyes. Stay tune bike smutters! Check out more stories of our trip by searching for Beth’s Perspective!