revphil Posted in cat smut, Chicago, chicago critical mass 15 year anniversary, Critical Mass, Duks hot dogs, Lake Michigan, Roa, The Music Box Theatre — No Comments ↓
We left of in Wiconsin
Which was awesome, I might add.
And from there we traveled to The Windy City aka Chi-city aka The Big C…. or to call it by its more conventional nam, Chicago! 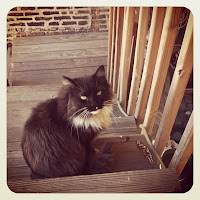 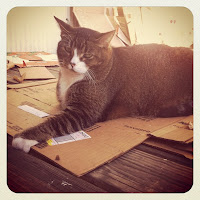 First of all I would like to give a shout out to these three adorable cats. The fat one and the fluffy one belonged to our host, Steven, and the kitty in the cone was his ladies. Thank you for the cuddles guys! 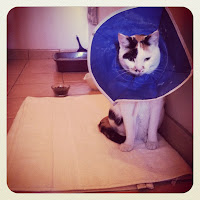 Second of all… WOW! Chicago. Is. So. Much. Fun! the first day we got there was the 15 year anniversary of Critical Mass. Luckily our host, Steven, was also the ride leader. His apartment had been  turned into a print shop as they had made hundreds of anniversary Tshirts, I got one in salmon pink! 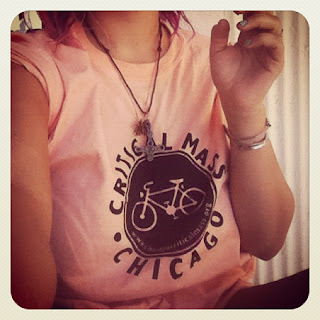 Critical Mass shirt!
We met at the Daley Plaza at 5:30 pm. Same place, same time every month. As thousands of cyclists of every age, color and creed milled around we set out to tell people about our show the next day. After about twenty minuets of handing out flyers and making new friends the ride set of. With thousands of riders, it was hard to move very far and at certain points I was certain it would have been faster to walk, but thats the joy of Critical Mass. Its fun even when its frustrating and you walk/ride your bike when you have to with a smile on your face. The ride ended at an open parking lot/pit area with a giant mural on the wall by an artist called Roa. I took a bad quality picture that you can see below, but I suggest you click his name, its linked to his work and you will not regret it. 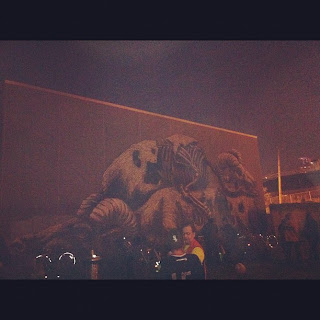 Roa’s work at Chicago CM
After critical mass, Steven, Poppy Cox and I got hot dogs from an all night cafe called Duks. We ate, we laughed and we sang along to Three Dog Night. Amazing end to an amazing night! 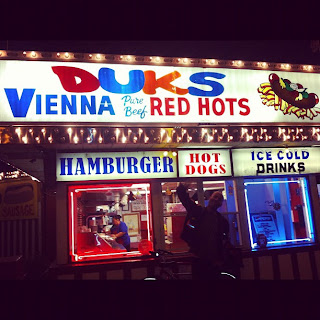 Steven outside Duks.
The next night was the show and also the annual slut walk. During the day we were a little too sleepy from the night before to make it to the slut walk, but we did however manage to make it to the slut walk after party. We got there with a few hours to go before the show and passes out fliers. Met some wonderful queer folk and introduced them to the world of bike sexuality. We left with little time to spare for the show but somehow managed to get to the theatre early. We were doing our show that night at a space called The Music Box Theatre.  The people trickled in and the show went quite nicely. It was a large theatre, so it seemed a little spread out, but overal we had a good turn out! 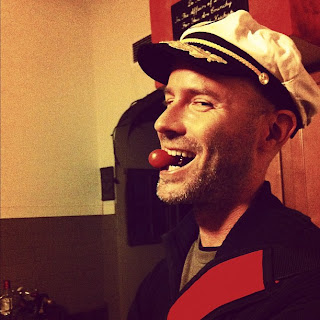 Steven taking a tomato break
The next few days we spent time riding around the city, visiting new friends houses and dinner parties. I used a laundromat for the first time (huzzah!) and Poppy and I spent some time hanging out checking out local cafes and clothing shops. Overall Chicago was an amazing city, such lovely people and such a fun city to ride bicycles in!
After leaving Chicago with some fond memories and another good show under our belts we set of for Detroit, Michigan. On the way we decided to stop of to see the sand dunes on Lake Michigan. We packed a picnic of sandwiches and vanilla lavender toffee and ate on the sand. Absolutely stunning. If you ever get a chance to check out one of the great lakes sieze it! 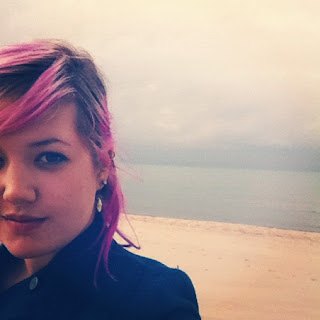 This is what we looked like when we went to Lake Michigan. 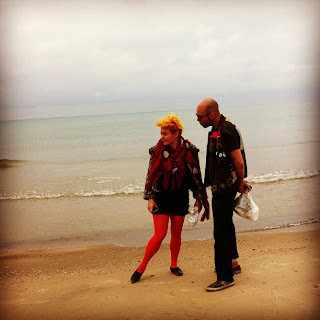 Check in next time for all the crazy fun shit we did in Detroit. It inclues pepper spraying a wall, urban spelunking and not geting let into Canada!