revphil Posted in Bend, REmember, Salt Lake City, Turning Trixxx — No Comments ↓
I am the new girl. The newbie. I like the way it sounds, but I am going to strive for a new name by the end of the tour like… the well versed in bike smut tourbie? We may have to work on that. This is my first post on this blog, but it will not be my last. My updates will come frequently. However as I have been distracted these past few days and I have updated you after the first three shows. Sorry bout that, I will remember in the future. I will. Trust me! With these updates I hope to give you guys a new perspective of what shenanigans we are getting ourselves into and whats its like to tour across America showing short erotic bicycle films. The perspective of a 20 something, British, purple haired cyclist. Hold on to your bike seats ladies and gentlemen this is going to be a F.U.N. one! – Beth Willow Yeah!

First weekend of the tour, three shows in and all of them successful so far! We sat of Thursday and made it just in time to Bend, Oregon. Luckily this show was in a theater so the only needed to be set up was the laptop and the merchandise table. We did two shows that night one at 7:30 pm and another at 9:30 pm. The first was good, small, but interesting participants that made it fun! Our lovely host offered me, rev and Poppy a beer and a slice of pizza each so with a little food and a local beer in our bellies we starts the show

The audience was lovely and provided some good insight into some of the films. By the time of the second show the room had been filled so I could tell this was going to be a lot more fun. I sold condoms and stickers to those who were interested. One of them was a young man, an artist, who was going to be deployed shortly back to Afghanistan. He called me ma’am which me me blush. I told him no one had ever called me that before and he said it was a shame. He bought a sticker that says my other car is a tiny penis, he is going to put it on his gun when he gets deployed. He made me an origami flower out of one of our programs while we talked about sculpture and the human body. He thinks it’s the most beautiful form of art there is and finds himself getting disappointed by those who see it as a taboo, as something that isn’t beautiful.  I don’t remember his first name, but I’m pretty sure his last name is Cobb. So I call him Sgt. Cobb. He made sure I knew he was only going to war to pay for school. I hope it all works out for him, he was a very real person and that’s rare to find.
Our hosts were two wonderful people. Micha was the husband and his wife brought there eleven week old son to the show. They have four kids. They invited to sleep at their house, however the kids waking up at 8 in the morning was an issue for those of us who wanted more sleep so we ended up staying at the movie theatre. It was comfortable and in the morning we were able to get a coffee from the shop next door. That was on Friday, the day Poppy left back to Portland so she could work. She will meet up with us in Minneapolis and Gaurdrail is supposed to be meeting us on the 12th. Or in Bozeman. We haven’t gotten to that point yet. So we left Poppy with a sign to hitch back to pdx (she arrived safely!) and then it was just Rev and myself on the road for the twelve hour drive to Salt lake city.

We had a night to space before the show so we decided to split it up into two six hour trips. I drove on the highway for the first time. Open road, no speed limit and no cops around. Couldn’t have asked for better driving conditions either, although it did get a tad windy at times. We drove to a placed called the Alvord hot springs just on the border of Oregon next to a huge playa of desert and nothingness. The hot springs are a naturally occurring treat that at the source is next to boiling, but by the one it gets to the tub we were in it was 170 degrees. And what a treat it was being able to wash of the sweat from the day of driving and drink a nice beer under the blanket of stars that covered us. While in the sprig we met a handful of wonderful people. The first was a couple named Vivian and David. They had met 15 years ago very close to where we were then, and they lived not too far away. She was a veterinary surgeon and he used to race bicycles back in the day. Then he started racing vintage sports car when he got a little older. Now he makes or fixes machines (a little foggy on the detail here!). We got to hear some awesome birthing stories and When i asked Vivian what her favorite part of the job was she said pulling cow out of lakes when they have fallen in. I thought that was funny. We met another young man that night called Tree Lifegiver. We told them all about the tour and they were all interested, promising to look us up and check out  show one day. We slept in the van that night with the side door open to see the stars and the sunrise. We awoke early, went for another soak then set of in the road to salt lake city.

We arrive earlier then we did at the Bend show and again the theatre was already set up, this time in an awesome bike warehouse called point six percent productions or Brian’s place. The first tall bike sighting of tour happened here as people started making their way in around 7:30. Brian, our host, changed into his dressing gown and the show began. It was a Saturday night and the small but die hard cyclist scene of salt lake city had come to see the show. They laughed, shouted and cheered through the whole show adding an hilarity to the already quite funny videos. After the films and the questions and comments we went into the first free give away of the tour from Good Vibrations. Earlier in the evening two gentlemen named Steve and Mark Chetti (or Cheddar?!) helped devise a series of events that would allow participants to win the prizes. They included a tricycle lap dance, beer bottle blow jobs and sexual trivia questions. Amazing lap dances were performed including some very graphic couples performing the beer bottle blow jobs. Harts of to Jimmy for the best tricycle lap dance of the night. Hilarious! Our sides were hurting from laughter but we still danced the night away, sold some underpants (which Steve took the liberty of walking around in all night) and had many discussions of bicycle and sexuality! Bikesexuality! We closed out the night hanging out at a locals house, where I (Beth) got to meet a rather fluffy rag doll cat called Louie. 100% awesome tour so far!
Tomorrow it is on to Boulder where the tour will continue and the blog post will start coming after every show! (sorry for the late updates!) 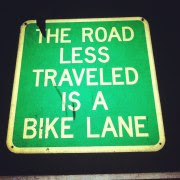 See you at a show near you fellow bike smutters! Keep the F.U.N. between your legs and remeber, safety 3rd!
Follow the twitter, tumblr and Beth willow yeahs instagram (just search that name or any bike smut hashtag!) for updates on photos and other tid bits along the road!