revphil Posted in bike smut, cheese curds, lothlorien co op, madison WI, milwaukee WI, riverwest public house, Talking Heads, The Specials, Turning Trixxx, Wisconsin — No Comments ↓
So after leaving Minneapolis  we headed to Wisconsin, the home of the cheese heads!
Our first stop was Madison where did our show at the Lothlorien Co op    on September 26th.
We got there early enough to set up, make some snacks and set up with time to spare. The show went well, and afterwards a group of ten went out for drinks at a local bar. We had a right laugh, sharing pitchers and eating fried cheese curds. Yes, for the first time ever, we ate cheese curds. I only had four of them, but I can still taste the oily goodness in my mouth and feel it festering in my tummy. The jukebox played Talking Heads and The Specials, and dancing was of course in order. A fun night turned into a comfy one as we finally made our way to our hosts houses for the evening. In the morning the view was gorgeous, as our hosts house was right on the lake. 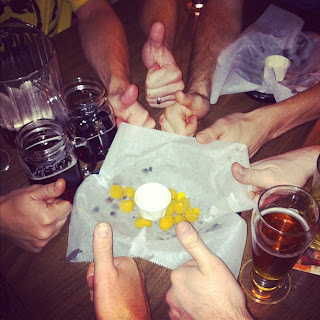 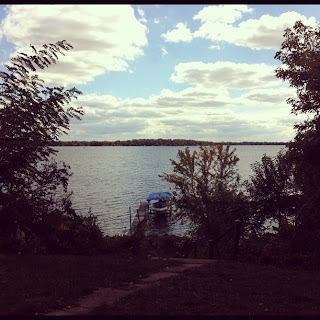 View from the hosts house.

After the goodbyes we left to go to Milwaukee. Our host worked at a local bike co op called Spoken Cycles, so we met him there, gave our bikes some love and later went over to his abode. The show took place at a local bar called the Riverwest Public House and we did two showings, one for those who did not participate in the underpants ride, and one for those who did. Overall it was a good turn out, we had a laugh or two and I became friends with the lady a the door. She was quite hilarious. 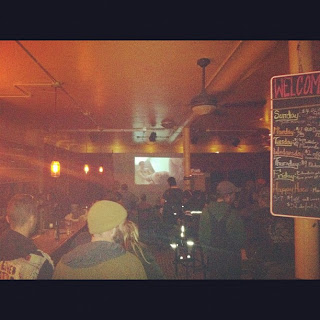 Our next stop was Chicago, so we clambered back into Babs Johnson and took of for the windy city!