↓ Skip to Main Content
Home › Backlash tour › BushwickBK Reviews, Thanks to the Goods

BushwickBK Reviews, Thanks to the Goods 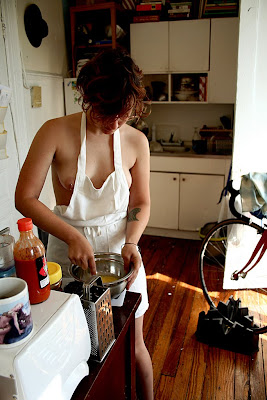 We took a few extra days in NYC to enjoy the wild and crazy times. We mixed up with the local polo scene, visited a few watering holes, helped out at TimesUp a great bicycle nonprofit and on top of all that we had 3 great shows in Brooklyn! They were attended by one Mr Paul Cox of the Bushwick BK who seemed to rather enjoy himself:

Bushwick suits bike culture far better than its pitted streets and industrial traffic would suggest. At least, that is, the particular bike culture that concerns itself with tallbike jousts and carbon angst and calling itself “bike culture,” which springs up wherever there is a collective will to cobble together an old steel frame and stick a boombox on the back. We must bow to Portland, however, as the true capital of greasy chains, where the bicycle is elevated to a way of life, a tool of liberation, and an object of lust.

Thanks for the kind words!

especially when films have come from other bike culture mainstays like NYC*, SF, and Seattle as well as more unknown gems such as SLC, Columbus, Tempe and Victoria BC.

It was a great show and DAMN did we ever enjoy them blended refreshments!

Our most gracious thanks to The House of Yes and the Band of Bicycles.

Photo credit to Courtney Rodgers and and the bike-curious Mr Cox.