The matter of sexualized politics has become galvanized for many of us in the bikesex industry.

Naked riders are taking to the streets more than ever and organizers have increasingly found themselves dancing on the verge of cognitive dissonance. 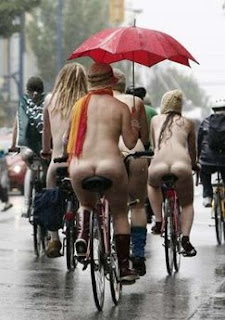 Are nudists using bike culture to promote bare bodies? Are cyclists hiding (very little) behind their constitutional right to political expression? Are attention whores using media to show us their wangs? Are pedestrians using us as a rolling strip club? Are bikers using pedestrians to get free drinks? Are Google searches for naked bike rides at an all time high?

In summary: we want to know who is using whom.

We are fortunate that presently none of the answers to those questions change what it is like to ride naked all that much. In the future however, all naked bike rides may be plagued by all manner of distractions and such.

What to make of all this attention? It definitely has its pluses and minuses.

For example, it feels like we should be grateful that a car blog would cover the World Naked Bike Ride. They actually do a pretty good job of sheepishly reminding people why the WNBR exists. For a car blog to even acknowledge the matter of oil dependency and car culture without being overly rude seems like a big step. But then they totally snubbed Portland’s record setting naked ride. We would take issue with their lack of journalistic integrity, but it is just as likely that they will have similar feelings about our recent presidential election coverage.

Besides, there are those of us who feel things like the World Naked Bike Ride should be clouded in mystery. Car blogs reporting on bike culture will go a long way towards generating more mystique. Do you really care when and where WNBR actually started? Pffft… BOORING!! A better question is when did riding a bike naked become wrong? Given the power of time travel we at BikeSmut.com promise swift kicks in the crotch to those lame pricks.

But ahh, in Eugene, Cascadia radical bike culture is sexy and alive and well (enough).

He reads from his book this Thursday, March 19th at Powells in Portland. For those in the audience: expect awkward questions and evasive answers about Mapes’ personal feelings on bike sexuality.

——
later on… what is up with people in the southern hemesphere? why is there weather so fucked?!?