Poppy Posted in Uncategorized — 1 Comment ↓
Seeing as the business we bicycle-pornographers have got ourselves into, that of the ‘sexually explicit’ and in-turn, the censored, is so heavily based on the letter ‘X’. Then noting our clever re-appropriation of the forbidden letter for this years theme of our film festival, Bike Smut 6: Turning Trixxx, we thought it might be smart to look a bit deeper into the origins of the letters exclusivity.

Our talented illustrator and our teams only amateur etymologist, Son of Son decided to spend a little time looking into the matter. This is what he came up with.

There are many ideas on the origin of the triple x, but its fair to say the symbol is ancient, fundamental and a very basic communication. I hereby offer up a few interpretations. I like to think there is much overlap, that the fields of meaning merge. That the paths this simple signal outline are a hint at a pattern in the ways human animals think and react, The truth of the matter is that nobody knows… Wikipeadia tells us that the xxx was and is used as an insignia of strength or proof. The letter “X” is used on some beers, and is thought to mark beer strength, with the more Xs the greater the strength. the same being true of spirits or indeed moonshine. One x denoting weak alcohol levels, two denoting medium with three being the best you can get.

In the ancient alphabet of the runic futhark, the x, is the signal of gebo, meaning gift or love. It makes perfect sense to me that it would have been used in the sacred grouping of three to denote the totality of merriment, mirth and other wonders that come from the demon booze. We all know how much the norse like a drink now don’t we? 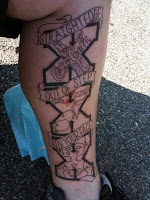 A punk subculture know as ‘straight edge’ emerged in the 1980s as a backlash to the hedonistic, often violent punk scene. It involves differing degrees of abstinence from vice. For example alcohol, tobacco, promiscuous sex and drugs. Supposedly the x symbol came into use from the cross that would be penned onto the back of the hand of an underage attendant to a show involving the serving of alcohol. This, in context with the straight edge movement become a sort of badge of honor and was also shown in triple.

Another interesting occurrence of the three signals is in the flag of Amsterdam. St. Andrews Cross, is said to represent Amsterdams three dangers. Flood, fire, pestilence. Funny to think now, that in a place most heavily associated with the legalization of vices, how the flag could now be interpreted.
Alcohol leads to sex. I don’t think many people need reminding that drinking aids our ability to ‘get it on’ and this leads nicely into the triple x in censorship and pornography. Screenonline tells us that the x certificate was brought about in 1951 to tackle the surge in films containing much stronger adult-oriented themes. It was later decided that the ‘x’ was far to suggestive and was eventually changed out to the 18 cert/ NC-17. It can be assumed that the bringing in of extra x’s was in a similar vein to its use in alcohol. The adult industry re-appropriating censorship as proof of how taboo or lewd their material is.