Really the “hot pepper coverage” is just marketing… it’s like Ned Flanders said, “this 4-alarm fire is probably only 2 alarm at best”. But still there could be a great unspoken outcry for more shots of the boys in blue wearing yellow, and so here is: 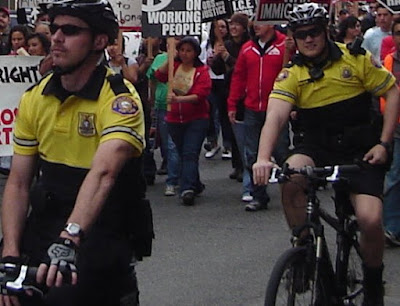 Does Portland having less critical mass = less time for cops to ride bikes = more fat cops? Are cops in NYC getting healthier because of their increased presence at Critical Mass? DUDE! COULD NYC BIKE COPS TAKE PDX BIKE COPS?!?

Perhaps the Portland Police Union step up its efforts to get Critical Mass popular again. There are a number of benefits including lots of easy overtime for officers with reduced health care benefits for the system overall.

This couldn’t happen at a more important time. Presently our team of bikesexuals are gearing up to ride in what could be North America’s best Critical Mass: