Get in our way and we will CRUSH YOU

Block a cyclist with your fancy car, get demolished by a tank. It’s really that simple. 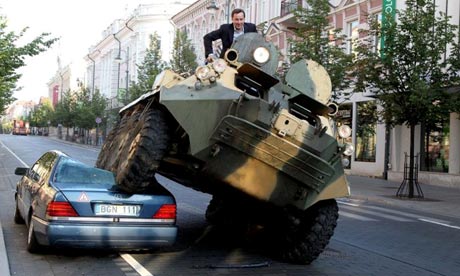 Drivers who park in cycle lanes would normally worry about receiving a fine or perhaps having their vehicle towed. They probably do not expect to have their car crushed beneath the wheels of an armoured personnel carrier which has the local mayor at the controls.
But car owners in Vilnius, the capital of Lithuania, may be choosing their parking spaces a little more carefully after the city’s mayor, Arturas Zuokas, drove over – and wrecked – a Mercedes in a stunt to serve as a warning to anyone who thinks about parking illegally.
…
“In the past few days, expensive cars have been illegally parked in almost this exact place – a Rolls Royce and a Ferrari,” says the mayor’s narration to the video.
“What should the city do about drivers who think that they are above the law? It seems that a tank is the best solution.”

Until then, the visual satisfaction of Vilnius: