Each week the films and performances in SPRUNG! will focus on a particular idea relating to sex and transportation without repeating any of our amazing content. The themes are:

But this isn’t about bikers vs drivers, or queers vs breeders, or pervs vs norms, or film snobs vs couch potatoes (well, it kind of is about the latter; we HATE when people shut themselves in). This is about elevating our lives. Both porn lovers and haters are enamored with the way Bike Smut engages topics of sexuality, providing a venue for emerging artists to share their ideas and a forum for discussion and exploration for all.  Drivers, walkers, longboarders, Rascal pilots, all are encouraged to share. (Note: we are making an exception for pocket bikes, if you choose to ride one of those around your neighborhood you probably deserve to be alone).

What a way to kick off this series of movies that have inspired better sex and better transportation then by capping off the May Day celebrations with movies inspired by the Revolution?!!?

“The Raspberry Reich” is an agit-porn movie about modern leftist Germans adopting the culture and politics of the extreme left wing movements of the 1970s. The leader of the Raspberry Reich, Gudrun, who has patterned herself after Gudrun Ensslin, one of the main members of the Baader-Meinhoff Gang (the Red Army Faction), spends her time indoctrinating vital, athletic young men to her cause. A strict devotee of Wilhelm Reich, she believes that heterosexual monogamy is a bourgeois construct that must be smashed in order to achieve true revolution. To that end, she forces her followers to have sex with each other to prove their mettle as authentic revolutionaries. A porno-political-palooza. 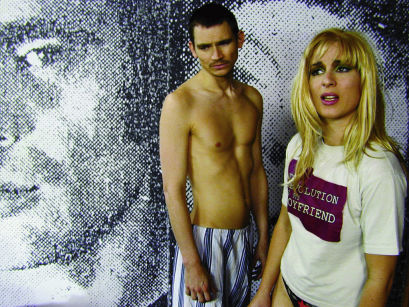 The film also acts as a critique of the left, particularly in its tendency to not practice what it preaches via unrealistic and dogmatic political rhetoric. The film is an examination of the phenomenon of “terrorist chic”, depicting how the signifiers of radicalism are now packaged and sold by capitalist culture as a way of neutralizing and rendering ineffectual any sort of viable, sincere revolutionary impetus.

With manifestos, blow jobs, threats of violence, and decrees of “death to the capitalist pig” whilst fucking in the street The Raspberry Riech will leave more than an impression. How this film has never been officially screened in Portland before is beyond us.

2 comments on “GET SPRUNG!”