↓ Skip to Main Content
Home › abq › Heating up the southwest

Heating up the southwest

revphil Posted in abq, Austin, los angeles, Negligee ride, pornotopia, race — 2 Comments ↓
Does it seem like all we ever do is pimp other peoples things?

With so many cyclical and smutty things going on it is quite a challenge to press on and stay moderatly relevant. Especially when more active photo blogs are giving it away. Having so many take up the charge of displaying the sensual side of cycling is rather encouraging/daunting/humbling, and yet we do our best to not let it phase us.

It’s fall, and like the metaphorical grasshopper bike punx take to the streets to show off the goods and breath in what we all fear will be our last dance with the sun. Underground parties will rage in the later coming dawns without being busted by neighbors who have taken to closing their windows as the temperature drops (unless you live in LA, where the streets have absorbed so much radiant heat that bike tires dissolve into the pavement)

If you happen to live in Austin, TX where accented twangs are frequently coupled with chickn wings and proudly dangling wangs you can probably get your fix for hot flesh at this upcoming event. Here is how the organizer described it:

we are encouraging women and men to dress in their skimpiest outfits, participate in a relay race criterium with sexually themed obstacles in between laps (ie: sex position polaroids, suck and blow the spoke card, condom balloon toss, etc.). Winners are receiving prizes from many of our enthusiastic sponsors- local sex apparel/toy shops! 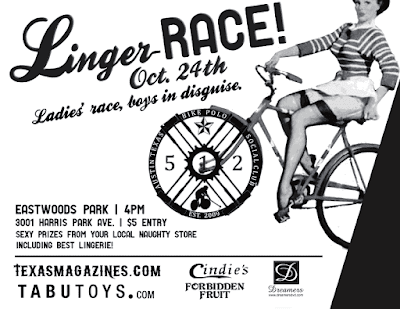 Caliente!
In a not exactly related bit of news we have been seen rolling around with the bicycle equivalent of “payola.” Folks have been asking, “what the fuck is up with those lights?” They seem to work cause when you are taking the lane on a bridge at 9pm you dont want a motorist say, “I didn’t see her” to a news camera live at 11.
And the final bit of Southwest info, Bike Porn has agreed to send one special video to make a special appearance in Albuquerque’s Pornotopia film festival in early November. They demanded something for their Best Of category. We blush a bit but yes, it really is quite a exciting collection of smut.

2 comments on “Heating up the southwest”