A story of loving a bike, riding with a man you like, and overcoming the shit that gets in the way

I was so excited to ride my latest love, RHonda, a vintage Huffy Red Hot, in the World Naked Bike Ride. She is so sweet. All original, red, three speed coaster hub with ape hangers and flames on the banana seat and chain guard. Fucking Flames. It was a first date for me and Kat, this hottie I met at a party a week before as well as RHonda’s debut. 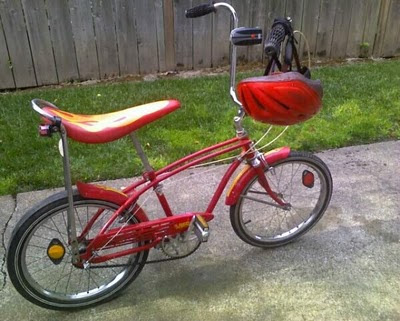 I had discovered my beloved RHonda on Craigslist earlier in the week and immediately knew from her sexy pics I had to have her. After a quick clean up and underwear change I set out to bring her home and make her mine. Two long, agonizing bus rides to meth fogged territory I finally reached my destination and found RHonda was as spectacular in real life as she was in her pictures. Her heart was true but her wheels were not so I gingerly pushed her back to the bus stop. After two more excruciating bus rides back to my hood I dropped her off at a supposedly reliable bike shop. I asked them to give RHonda an examination and restore her to her original grandeur. They said they would. Liars!

Saturday morning I got the call that I could pick up my sizzling Red Hot. I gleefully skipped the few blocks to the bike shop. When I arrived they wheeled her around front and told me they could not fix the gear wire. They also said they aligned her wheels and she was good to go. Liars!

I noticed RHonda was a little tight on the way home but assuaged my fears with self assurances that stiffness could be expected from a bike that had been neglected in a garage for years. I brought her into my backyard and tenderly polished off the rust with cola and a wad of aluminum foil. She sparkled, she dazzled, she shined. RHonda was ready to roll, or so I thought.

Having cared for my magnificent new ride I went into the house to shower up. I sparkled, I dazzled, I shined. Kat came over and we had a light dinner. The night was going well and we we’re ready to roll the slightly downhill way to the NW Portland warehouse that served as the meeting spot for the World Naked Bike Ride. We got inside, got naked, got lubricated and then got back on our bikes.

Amid a horde of happy, stripped down cyclists I straddled RHonda proudly and chatted Kat up while waiting for the ride to commence. The night was going well and we began to roll.

The WNBR’s route took us back the way we came. This direction was slightly uphill. I really had to work to keep RHonda moving at the same pace as the other cyclists. The sea of nude bodies on bikes around me prevented me from picking up speed and I perceived that I was having to push harder than the riders around me. A lot harder. I was having to stand up and strain to keep my cherished Red Hot moving.

Kat noticed my distress and I embarrassedly assured him I was fine, A Okay. I don’t think he was any more confident about my assurances than I was but I tried to keep my poise, this was a first date. We continued to roll, and I continued to strain with a strained smile.

As we progressed down 23rd I began to realize that all that straining was taking an unpleasant toll on my body. I was feeling an impending need. You know that feeling. I considered my options, contemplating just how urgent that need was while trying to make witty chit-chat with Kat. After a few more blocks of deep deliberation I realized that need was urgent indeed and if I didn’t beat a hasty retreat I would leave a steamer in the street. The choices were clear. I would have to bust a move and move my bowels or move out of P-town.

But what to tell Kat? At that point it didn’t matter. I veered off the route yelling “gotta go, fearing the turtle” over my shoulder fully expecting that would be the last thing I ever said to him. I rode RHonda as fast as I could with my exposed cheeks clenched all the way home barely making it to the sanctuary of my bathroom. After the sweet relief of release the humiliation and dread set in. What, if anything to say to Kat?

I decided to use the completely pansy from of communication and text him. He replied with an understanding message saying he wanted to meet up with me. Maybe the night wasn’t a total bust.

I’ll probably never know for sure whether he came back for Rhonda or for me but Kat came over that night. Being a bike mechanic he immediately wanted to inspect Rhonda. He delicately flipped her over and placed her on her back so he could peer into her inner workings, lustfully examining every nook and cranny. He discovered her wheel was catching frame and that is why I had to strain. Kat fixed Rhonda and then turned his attention to me.