Media Monday: Erections are What’s Up

revphil Posted in austria, internet, media monday, words — No Comments ↓
Our desk is cluttered with sometimes insightful, hilarious and all too frequently, time consuming media. What is a bicycle pornographer about to end the Call For Submissions to do? 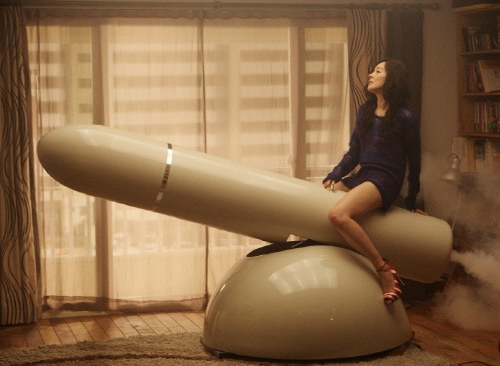 What they really wanna know is, why makes bike culture better than anything else you could do with your time. That question is a little more challenging. There is a lot of amazing things going on out there  but we frequently are very impressed with the resourcefulness of Bike Punks.

We don’t mind fancy-pants bike events (although paying to ride seems as intuitive as driving to the corner store… have you tried the alternative? NOT PAYING?) but having a group struggle a little for their art/play makes us all enjoy it a little more than just handing over $35 and getting a t-shirt full of sponsors at the end.*

Take for example our Bike Smut hosts in Graz, Austria. They didn’t have money for an indoor race track, so they built one… actually they built several, in their own homes.

The story is a little more complicated than that, but everyone enjoyed the process and time trial indoor racing so much that they have been doing it pretty regularly now for over a year. Here are some SFW pics of the riders.

We at Bike Smut are hardly exclusionary, but we are getting more selective in our age. Still if someone is not willing to try another culture’s art because ‘what is the point of exploration?’ you can just about assume that this person will have an answer for everything and they all result in this person being right without failure. That’s nice for the Fox News mindset, but being able to be challenged and come away from something with a new angle that’s why we learn and do new things!

Speaking of learning new things this graphic website is fill of interesting, if not very useful info on sex. Sometimes their facts are humorous, sometimes scandalous, (it is the internet, after all) but generally they are shoulder shruggingly unimportant. More interesting then their fact that Miami has the longest sex of any US city and that Denver Phoenix or Chicago have the shortest, is that the entire difference is only 9 min. WHOA, you mean people have sex for more than 9 min!?! AMAZING

This June is a little more sane for us, we only have THE FINAL FINAL SCREENING OF THE ORGASM TRAIL … EVER

Vancouver Friday June 22nd, which would be monumental in its own right but just a week later is

THE WORLD PREMIERE OF BIKE SMUT 6: TURNING TRIXXX
at the Clinton St Theater in Portland, Oregon

Go ahead, freak out a little, just save some for us.

*its statements like this that will keep us legit (i.e. poor)