↓ Skip to Main Content
Home › Uncategorized › One year later: An Obituary and a Discovery

One year later: An Obituary and a Discovery

revphil Posted in Uncategorized — No Comments ↓
Sitting here in New Orleans, just a few days after our show in Asheville, NC, which was another packed, underground show at Warren Wilson College. I realized it had almost been a year since we made a discovery there that totally transformed ‘The Orgasm Trail’ tour… Or at least the time we spent in the car. Almost a year later. I think it’s was finally time to release what has been aptly named: The Greatest Tape in the World. No irony intended.
The Oregon dream has died. That white steed with a manual transmission that delivered us from the eastern seaboard, safely around the southern states and eventually to our home of Portland, OR almost a year after we left it, is now gone forever. We have now taken up a new journey with a new vehicle, a maroon giant with a small nose who we fondly call, Babs Johnson. The Oregon Dream’s ending was a little tragic, but fairly well timed to say the least, ending it’s life just a few weeks before we took off on our next adventure, Tour de TriXXX.

While I do not want to go  into details on The Oregon Dream’s tragic end, nor do I want to touch on the occasional misery it caused us on our journey (ahem..). I do want to tell the story of perhaps the biggest gift a car could ever give. The gift of music. I have talked many times about how limitations breed maximum possibilities  and this was definitely one of those times. The Oregon Dream was only equipped with a basic cassette player and radio. A limiting way to entertain ourselves while driving across the country, but we were all pretty excited to find some silly old tapes at thrift stores to create the perfectly eclectic soundtrack to our ‘Orgasm Trail Tour’. However, we never expected to discover something so epic. 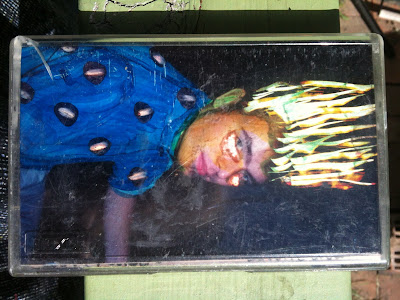 The second or third stop on the tour was a show in Asheville, North Carolina, where a lovely house of queers on the Warren Wilson campus had organized a house screening. A few of them had been involved with one of the movies we were screening, so they were extra excited to watch the program. They day after the show, they directed us to the campus free shop, so we could grab a few necessities before we took off again. Inside we found a few useful items, (like the pants that Reverend Phil is still wearing to this day,) but what really caught our eye was a rack full of casette tapes. Grimm and I browsed through the selection and picked out a few goodies. (The Forrest Gump soundtrack contained a ton of great americana, perfectly suited for the road and Louis Prima promised to add a bit of soothing class to those late nights and early mornings.) In our perusing, I stumbled upon a cassette that had no name, just a really interesting cover. On closer inspection, we could see that it was a tape that had been home recorded, with the inner packaging reworked for some personal flair. We assumed that it must be an old mix tape that someone made, so we thought we would take it and see what was on it. Nothing could be lost, it was free, right?
We had to get on the road pretty quick, and didn’t give much more thought to the tapes. We had a show in Athens, GA that night and we didn’t want to be late. It wasn’t until the next day when Grimm and I decided we needed to do a major car rearrange to increase our functionality, that we pulled out our new finds. We decided we should check out the mystery tape first and see what was on it.
By the third song, we were totally entranced. This was no mix tape, but a home recorded tape of all original material, and  calling it ‘original’ is a bit of an understatement. It was funny, and complex, yet simple and somber all at the same time. A little reminiscent of  The Talking Heads at times, but then switching to melodic folk closer to that of Bonnie ‘Prince’ Billy. By then end of side one we were pretty sure we had found ‘The Greatest Tape in the World.’ 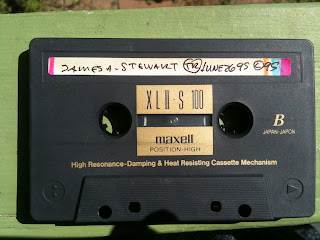 The tape was labeled: James A Stewart, Copyright 1995. There was a listing of song titles on the inside, coloured over in a variety of highlighter pens. The cover had been made from a photograph, of what we assume to be the artist, but with hair that looks like flames that he created by scrapping into the emulsion (an technique now lost with the advent of digital. I’m sure instagram will come up with some filter soon, so we can recreate it in the modern age.)

While we did not get to listen to the whole tape that night, and ended up staying in Athens, GA for quite a few days, our next drive was sure to included an more in-depth look into this fascinating find. I was confident we had stumbled upon something great. The more we listened, the better it got, and one of the best things about the tape, was that it played for almost two hours. The perfect thing for long drives, when most cassettes aren’t longer than 40 minutes. When our British tourista, Christopher, joined us, he was immediately sucked in to the wonders of the tape too. 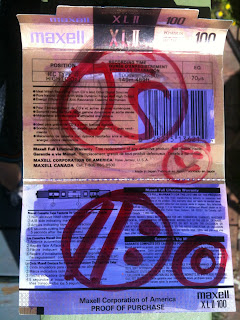 Who was this guy? Where was he from? What was he on? What ever happened to him and his musical career. We tried many google searches looking for answers, but found nothing. We tried searching for song titles and lyrics, and as his name is not unusual, and we had little else to go on, and stil came up with nothing.
The story does not end there. When we got to Tucson, AZ, I knew I had to share the tape with more people than anyone who hopped in ‘The Oregon Dream,’ with us. This music was too profound to keep to ourselves. Plus, at the rate we were listening to it, I did not want the tape to come to an untimely death. So I decided to digitize it and share it with the world. (I know, sorry, it took a while to get around to it) I thought it would be easy, The track names were written down, so I could just digitize the music, name the tracks and start circulating. However, I soon realized that it would not be that easy. The same number of tracks that were on the tape, as were written down, but it soon became clear they were not written in the same order. Some songs were obviously named, like ‘Testing 1-2’ he repeats the line a bunch of times, no way would any other track be called that. Same with ‘Touch my Disease’. However on the track listing they are written ten tracks apart, where on the tape, they are only 4 tracks apart. (What??? Why??? James A Stewart, what were you thinking???) I then decided to dive deep into the lyrics to try and better identify each song. Releasing this music without thought seemed unfair to someone I could’t get consent from, so the least I could do is try to name the tracks right. 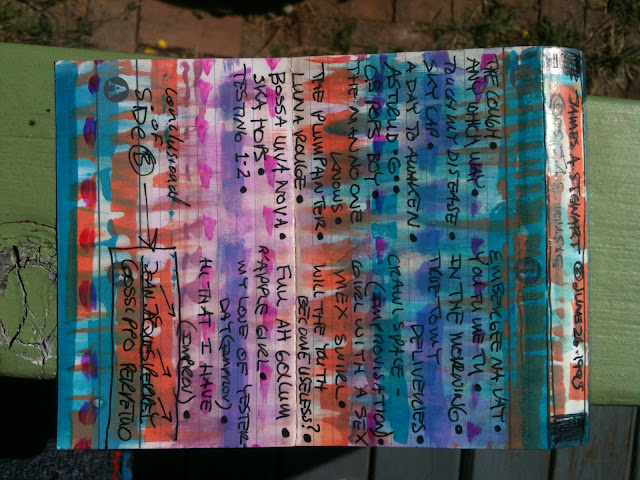 The first track I decided must be ‘Ska Hops’ since it was the only slightly reggae sounding track on the tape. There were however, two bossanova sounding tracks and only one title that made sense, ‘Bossa Luva Nova’. When discussing it with Christopher, I had told him I decided to assign ‘Astrud G’ to one of the instrumental tracks, as it didn’t seem to fit anywhere. He told me maybe I should try and google the title as it might mean something that we didn’t know about. Sure enough, Astrud Giberto as one of the most famous bossanova recording artists, responsible for making ‘The girl from Ipanema’ an international hit. So we knew Astrud G must be the other bossanova song, but which was which? Well, one has a line that goes: ‘I love you honey, but you’re dead’ and just like that, we had out answer. 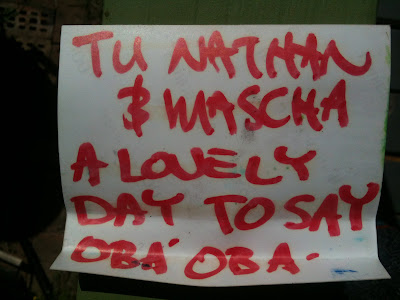 And then came the question of what to call the thing. The only titling appeared to be his name. However, on the inside of the cover photograph, he wrote this: “Tu Nathan & Mascha A Lovely Day to say Oba’ Oba’.” I figured it was really the only appropriate title I could give it. So here you have it, for the enjoyment of all our wonderful and strange friends and fans: The Greatest Tape in the World: ‘A Lovely Day to Say Oba’ Oba’.’ I hope it brings you as much pleasure as it brought to us.

Side A
Side B

I will release each track one by one as well. For now, here is my music sleuth, unofficial track listing: