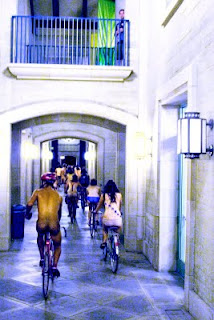 Thus we priming the chambers that shall hold our impressive tubes.

After our Mini Bike Winter Opening Gala (including a DIY Stencil Station, “Should bikes save the planet?” panel discussion and a lineup of excellent bike movies including a great documentary on Victoria, BC’s own Velo Vixens.

Then on Monday the 15th we kickoff the Backlash Tour by hosting a lecture and screening in Eugene. Then on Tuesday the 16th we are working with the Ashland Bike Polo Society to put on a screening in a warehouse. (HELP! We still need chairs!)

Then we bust a nut into California and show the goods at the Bike Kitchen in Sacramento on Wednesday. Then mix it up with the folks of Davis on Thursday (we think they will pull it together) then we return to the Roxie Theater to do 2 BIG shows in San Francisco on Friday and Saturday Feb 19th-20th.

Oakland? Santa Cruz? You are both on the bubble.

Ready and willing are the various students of Pitzer College. Last year their exuberance included a naked ride (which has become a regular activity) a camping trip, and a variety of other pubic displays.

We plan to be invading their space February 24-26th or so.
Then into central Los Angeles, playing a show at the TOW on Saturday and hitting up the Long Beach Art Theater on Sunday, Feb 28th.

Then we sprint all the way down to San Diego for a show on March 1st. It may be dubious that we get to play Tijuana but there is always a possibility.

We will tell you about our next leg soon. But if you are in the south you are on notice!

If you have a calendar feel free to mark it. Oh, here you go: http://bikesmut.com/schedule.html Still in development, but pretty keen eh?