Last time we checked in with the naked bikers they were getting along fine with cops, pedestrians were going horse from cheering, and most of the concerns of biking naked were related to severe genitalia road rash.

As exciting as all this is, just a continent away there is a naked bike ride with 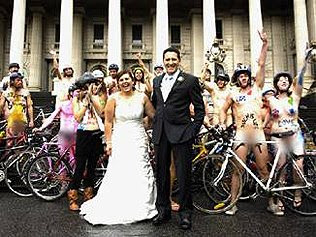 Although though it clearly is a WORLD naked bike ride the changing seasons make for some impractical scheduling. Thus this past weekend many southern hemisphere cities were ablaze with naked cyclists.

Alas, most cities in North America and Europe won’t be officially rolling naked until Saturday June 13th. Someday we expect there to be some WNBR sanctions on cities which routinely go against their hemisphere’s chosen naked ride date.