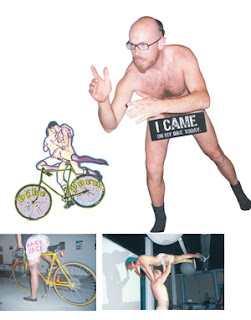 The “bound” element of the tour’s title became more pronounced in No No No Yes, wherein a boozing, scantily clad woman unlocked her bikefriend — a gentleman with a seat strapped to his back, handlebars to his neck — and proceeded to caress his parts. Ashley Lindstrom

With all the McDonald’s Playplaces and similar hypoallergenic areas in the world these days it seems that “child friendly” is the only concern that measures these days. What is missing from this picture of course is that without safe spaces for adults to consider and discuss adult themes people are forced to repress feelings which often results in unpleasant releasing of pent up emotions in inappropriate places.

Thanks for Ashley Lindstrom and Noah