Presenting the Bike Saviours’ “Not Safe for Work Trade” 2011 Calendar. 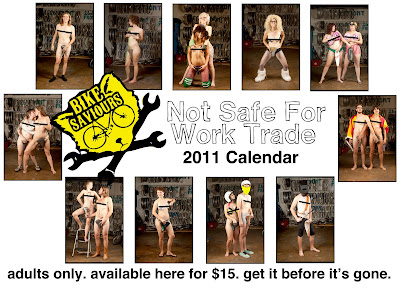 Apparently the calendar is a bit more racy than last year’s, and inspired us to query deeper about what is going on behind the lens at Bike Saviours. To that end Heather Hoch of the Saviours, answered our questions which are left intended. Her answers are in bold.

So what is happening these days at your co-op bike shop in Tempe?

Bike Saviours is doing great! We had a really huge Tour de Fat last month which was great. Other than that, we still just teach people how to fix bikes! Ha.

Did you set out to make a more adult themed calendar? if not how did
it come to pass?

We actually were debating this year whether we wanted to make the calendar more or less sexy for 2011. We hadn’t officially decided when it came time to shoot, so we kind of just let the models do whatever. The first people up were for March and they were a male and female couple, both only wearing underpants and doing some S&M stuff with wrenches and bike tubes. I guess it just snowballed from there.

That is actually quite a stellar response. Sex exists and you liberated folks can use it as they want. So you say that new calendar is customized with information about your shop, bike holidays and events instead of boring old holidays like Columbus day. Can you give us an example of a bike holiday? (We know quite a few and yet were not consulted!?!?)

Most of the bike holidays we included are annual or monthly Tempe rides and such like “Bike to Work or School Day” in April or the Phoenix Critical Masses. We also have the Bike Summit in D.C. and some silly things like Be Bald and Free Day. All of the proceeds go directly to funding our shop, which is a 501(c)3 non-profit bicycle collective with a focus on educating people on bike maintenance and safety. Thanks for your support of our collective!”

Buy it direct from them at www.bikesaviours.org