Victoria BC feels like a biker’s paradise. They got tons of happy people, mostly good weather, and an offensive amount of bike infrastructure. In fact there are so many bike trails that we didn’t even see a biker for most of the 1st day. But when we saw them, we really saw them!

They came from all over Cascadia to frolic on Vancouver Island in British Columbia, Canada to enjoy the Bike Prom Weekend.

Friday kicked off with a “take a bike ride though my childhood” allycat. It was decided that people with low gear ratios (polo bikes) should stick together. Back at The Project an impressive bike art show was on display. The Bike Lab Society has been churning out art and artists for some time.

Come Saturday there were 13 randomly assigned bike polo teams for the tournament. The trophy painted gold and accompined by a bottle of tequila was offered up, but rather than being overly competitive, the game play was rather uplifting. Our team had a newbie a septuagenarian, and a pornographer. What force could possibly bring these 3 wildly different bikers together to play together?

In this case it was green label Tilt.

Alcoholic energy drinks, like Joose, Tilt and Sparks are not sold in Canada, so US citizens traveling north often trade our hyper-drunk elixir for a more local and green commodity. Many seasoned Canadians even go so far as to request it in advance. A good plan, as it can become a highly contested beverage. Perhaps the most fun thing to do is watch someone who has never tried it before go through the stages energy crunk:

If it seems like a lot of suck for only one stage of “whoop” you are right. But oh man, what a stage. Supposedly it makes you more charming but I think it just makes you want to take your pants off. And so our team played with no pants. And we lost! And because we were in Victoria (fuck yea!) we didn’t feel like losers!

Then the ride to Bike Prom. Naturally, the goal is to look as fancy as possible while not getting anything caught in your moving parts. (Why someone has not made a movie where the long, flowing clothes of the biker are stripped off by the rude cycle is beyond me.)

Bikers are hot. They use their bodies, they often don’t care if they look stupid. They can cross dress and make those lame-os who thought about x-dressing but didn’t feel insecure.

At the venue we found a car had parked in the parking lot. Normally not a problem, as few of us were driving, but it turned out that the Velo Vixens needed the parking lot to perform their bike-dance interpretation of Alice in Wonderland.

Kinda sad really. But back in 06, when Red Bull was backing BC Homophobes they really had a good chance of going all the way.

No it turns out this was the motto of the local men’s Rugby squad, who we were renting the venue from. AWKWARD

So much so that we even found this note attached to the windshield.

I met a girl who has been studying law, whose father is a lawyer, and who happens to be a self proclaimed dyke. She was so upset it nearly made us stop drinking.

It was all rather surreal. Maybe that is the part i liked about it the most. Just when you assumed that things were not going to get any stranger, bam! You’ve crossed a “NO BIKES!” fence @ 2am and are riding on a narrow slab of concrete 20 feet above the Straight of Juan de Fuca. (ala the James Breakwater)

We also learned a special phrase: “Knaepe Cykler” is how you say “fuck bikes” in Norway (was it Sweden?). (it kinda sounds like neh-PAY SUE-claw) Be sure to share that with all your northern land friends.

Most photos by Tom and Kelsey who are kind and sexy and have yet to find a boundary they wont push. 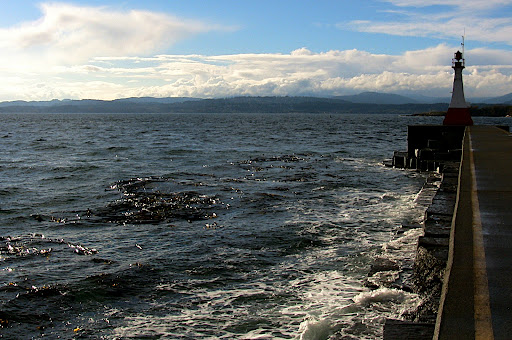 We did not fall off this sea wall. Although we did notice a rather strange signal pattern on the US Coast Guard’s beacon light.