whats on the menu? 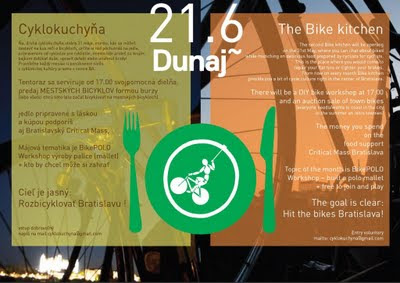 What can we say about Bratislava? It might have been a cursed day. It was almost certainly our least popular show on the Euro tour, possibly even in our 5 year history!

Things started out great, with a modest audience gathering and cheering on our 3 opening performances, including the unveiling of our new Bikesexual Robot!

Like a good lover, the program which starts lighthearted and get more hardcore over time. Alas, the audience had been drinking for several hours, and were not very patient. Drunk bikers often need more than a gentle touch to get them rolling.

Nearly all the chairs were full, but the room itself was massive, which is not ideal. Nor is having a bar in the same space as the movies, as any distraction from the images is attention diverted.

The final straw was a technical issue that cut the image for 2 min.

Oh well. You can’t molest EVERY bike. And after a string of four excellent shows in Czech (Prague, Brno, and Pardubice were organized with only a few days to promote) one misfire is acceptable.

Still they make some delicious art. We dont think this will be the last we hear of Slovakia!